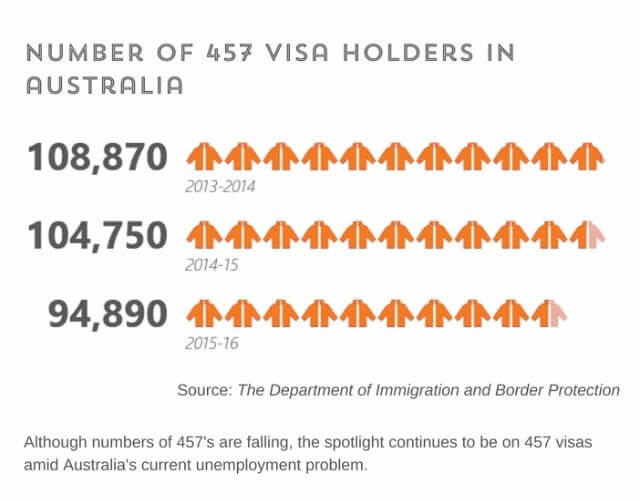 While the topic of 457 visas has attracted a lot of political and media attention with growing concerns over Australia’s unemployment rate, it’s worth noting there are 95,000 primary 457 visa holders currently in Australia, and if we include their partners (who also have work rights), they still make up less than 1.2% of the Australian workforce. There are also 9.7% less 457 visa holders in Australia compared to last year.

The Labor party, however is arguing the scheme is putting Australians out of work, which has prompted ‘Australia-first’ campaigns by the Coalition government – and now both parties are promising to tighten rules for skilled foreign workers on 457 visas.

The Government has already cut the period a 457 worker can stay in Australia between jobs down to 60 days (applicable to visas granted after 19 November, 2016) and further changes are expected.

Possible 457 visa changes being discussed in the media:

A shortened list of eligible occupations for 457 visas
Immigration Minister, Peter Dutton confirmed last week that the Government was looking to cut the number of skilled occupations eligible under the 457 visa scheme. A number of proposed options are currently under review, including a recommendation by the Productivity Commission to remove the Consolidated Skilled Occupation List of 641 jobs, advising instead to use the 183 listed under the permanent migration stream.

Employers to pay a significant training levy
This was recommended by an independent inquiry into the integrity of the 457 visa scheme commissioned by the Abbott government, and more recently by the Senate Education and Employment Reference Committee. If introduced, the levy would increase the costs to recruit overseas employees.

Meanwhile, some industry leaders have spoken out against the possible changes:

Deputy Prime Minister, Barnaby Joyce has also spoken out against changes to the 457 visa scheme due to its importance in boosting the economy in regional Australia. This has lead to the argument that perhaps regional 457 needs should be treated separately.

With the Government tightening 457 rules, getting support is important to ensure your cases meet any new legislative requirements and have the best chances for approval.

Interstaff will be keeping you updated on any changes to the 457 visa scheme as they emerge, however if you have any questions, please feel free to contact us at [email protected]