The Australian newspaper today reported that short-term arrivals from mainland China and Hong Kong increased by 21% over the past year, with a record number of 1.4 million Chinese tourists visiting Australia.

While New Zealand proved to be one of China’s top destinations in the previous year CommSec Economist, Savanth Sebastian said Australia had 52,000 more Chinese tourists visiting the country than New Zealand in the past year.

It’s likely that Australia will continue to be a popular holiday and business travel destination for Chinese tourists according to Mr Sebastian who said, “The Asian giant’s growing middle class means arrivals are set to surge further.”

“No doubt the weaker Aussie dollar is helping,” he added.

It seems those who will benefit most from the influx of Chinese visitors are Australian retailers and tourist-driven businesses. Mr Sebastian said, “The new winners from the China boom are tourist operators and retailers rather than mining companies that benefited in the first stage.”

Despite the increase in Chinese tourists, The Australian newspaper also reported that over the past year up to May 2016, permanent and long term arrivals to Australia had declined to its lowest level since March 2007.

In addition, Commsec have released a chart showing overseas arrivals and departures data released by the Australian Bureau of Statistics, which show Australia’s sliding migration trend over the past few years.

The chart shows that Australia’s net migration (identified by subtracting overseas departures from overseas arrivals) fell to 263,920 in the year up to May 2016. The figure represents Australia’s lowest annual total since March 2007. Courtesy of Commsec, here’s the rolling annual total in net migration to Australia over the past three decades. 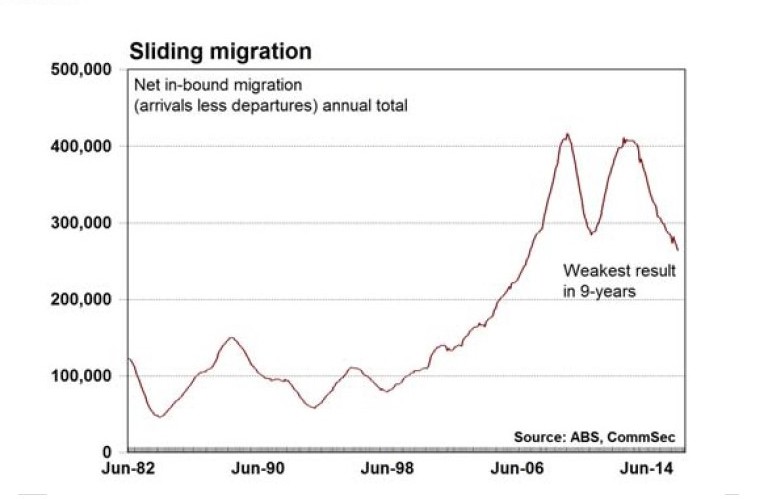